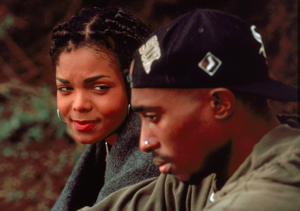 On this date in 1993, the “good girl loves bad boy” hood flick Poetic Justice appeared for the first time on silver screens around the country. Starring the late Tupac Shakur and Janet Jackson,

There’s no question that Tupac built an impressive film repertoire during his career, boasting a filmography with films such as Juice and Above the Rim, but Poetic Justice showed a softer side to Shakur and with Ms. Rhythm Nation as his love interest, this is one of the most memorable lack movies simply because of this unlikely duo. Rumor has it that before the scene where Pac kissed Ms. Jackson, she ordered that Makaveli take an HIV test before the actual taping.

While Poetic Justice was far from a critical success, the John Singleton directed drama is one of the most revered movies of the 90s Black film and director era. In addition to Tupac and Janet, Regina King, Billy Zane, Maya Angelou, Keanu Reeves, and Q-Tip all feature in the film. Poetic Justice was also nominated for the Academy Award for Best Song with “Again” which also topped Billboard Hot 100.

The post Today In Hip Hop History: ‘Poetic Justice’ Opened In Theaters 27 Years Ago appeared first on The Source.